Bitters of the Month: Maple Aromatic 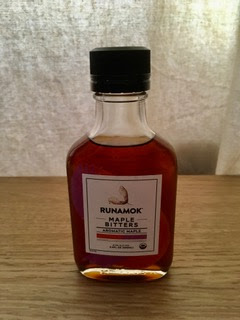 This month, we're testing Runamok's Maple Aromatic bitters.  Runamok is based in Fairfax, Vermont, not far from us at all.  On its own (with gin), it's sweeter than other aromatic bitters.  The maple comes through in the nose.
Obviously, with any aromatic bitters, we're going to try it in a Manhattan...
Bitters Battle: Hella Aromatic vs. Runamok Maple Aromatic
The Runamok is lighter in flavor, allowing more of the whiskey to come through.  We both preferred it.
Winner and New Champion: Runamok Maple Aromatic
For those keeping score at home, this is the second Runamok bitters to make it into our house cocktail recipes.  See here.  Tally another win for local Vermont products!
There are developments on the cherry front, too.  My wife recently informed me that her preferences has reverted back to Luxardo.  She feels it ages better than the Aramena.  It's interesting in that Aramena recommends refrigerating after opening whereas Luxardo specifically cautions against it.  Here's what happens with the Aramena: the sugar separates and settles to a sludge at the bottom.  I don't mean to denigrate - the sludge is quite yummy.  Luxardo, on the other hand, maintains a uniform consistency.  I'd be interested to know if the Aramena wouldn't separate if you didn't refrigerate - perhaps an experiment for some day.  But for now...
Cherry Battle, Winner and Champion Once Again: Luxardo
Posted by The Armchair Squid at 1:00 AM