We got a tree this weekend! 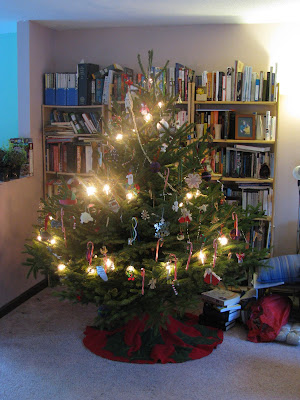 We went to Joyce's Noodle House in Essex Junction for lunch on Sunday. Just as I have a standard order in a diner (club sandwich if they have it, a burger if they don't), I also have one for Chinese restaurants: General Tsao's chicken (Joyce's spelling). I thought back to when it first became my go-to dish. For as much time as I have spent in Asia and such cosmopolitan cities as DC and New York, one might be surprised that I trace my Chinese culinary sensibilities to a small town in Iowa.

As discussed previously, I went to college in Iowa, in a town so small that it didn't even have a McDonald's at the time. (It does now) Every comedian who came to perform on campus would have a joke about the fact that we didn't have a McDonald's. Restaurant options in general were limited. But the summer before my senior year, a Chinese place opened. Dining hall food was actually reasonably decent as institutional fare goes but by senior year, everything tasted the same. Fiscally disciplined during my first three years, I allowed myself an occasional splurge for take out in my final year.

There wasn't anything overwhelming about their General Tso's chicken (their spelling). In fact, as far as I could tell, it was exactly the same recipe as their sesame chicken but with hot red peppers added. Those peppers made all the difference. I couldn't get enough. I have a very pleasant memory of enjoying my GTC in a lawn chair I'd dragged outside so I could watch the sunset while I ate. Sunsets on the prairie are well worthy of extra appreciation.

However, the very best Chinese food I had in Iowa was not in our town but in nearby and only slightly larger Newton. China King is well worth the detour if you're driving across the Midwest on I-80. Online reviews are highly amusing as few seem capable of believing that such high-quality Asian food exists in so unlikely a place. They had a sizzling rice soup I've never seen anywhere else and it was absolutely divine.

Oh, Newton had a McDonald's, too.

Following up on an earlier post, Our Girl seems to have settled on a new default toy store: Learning Express, also in Essex Junction. It has always been our best bet for Hello Kitty gear but otherwise, I have found them to be pricey compared to local indies. However, twice this past weekend, it was the store she requested: once for a birthday gift for a friend and once for herself.

In broomball news, we had our first game in a month on Friday night. We fought hard but still lost 3-0. One of our number got into a bit of a tussle on the ice - not quite what I had in mind when I signed on for this, I have to admit. We only have one more regular season game to go.

Posted by The Armchair Squid at 5:53 PM