Bitters of the Month: Peychaud's 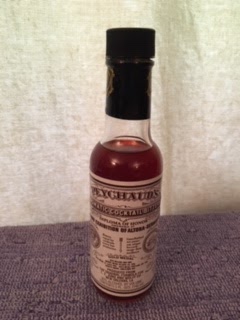 Like Angostura, Peychaud's bitters is gentian-based.  However, Peychaud's has a distinctive anise flavor that sets it apart.  It's also sweeter than either Angostura or orange bitters.  My wife described it as herbal in flavor.  It's a pretty, dark pink in the glass as well.

Peychaud's bitters was invented by Antoine Amédée Peychaud, a Creole apothecary, in 1830.  Peychaud is also credited with inventing the Sazerac cocktail, the bitters being one of its key ingredients.  The product was historically produced in New Orleans, though the current parent company, Sazerac, is now headquartered in Louisville, Kentucky.