Full disclosure: I went into this project assuming the vermouth was the least important ingredient in a Manhattan.  After all, most of the flavor comes from the whiskey and the bitters.  Even switching to a higher grade of cherries made more of a difference than I would have expected from a change in vermouth.

Long story short: I was wrong.

Let's back up a little.  What is vermouth and what is its function in my favorite cocktail?  Vermouth is a fortified, aromatized wine.  The fortification distinguishes vermouth from brandy which is distilled wine.  Vermouth came from Italy originally but, naturally, the French can never resist a good Italian food idea so they started making it, too.  Generally, the product comes in one of two forms: sweet and dry.  They are occasionally listed as Italian and French vermouth respectively or red and white vermouth respectively.  There are additional varieties but most of what you'll find in a liquor store sits under one of those two umbrellas.

A traditional cocktail is built upon three legs: base, sweetener and bitters.  While there are some drinks which use vermouth as the base liquor, it more typically serves as the sweetener.  Such is the case with the sweet vermouth in a Manhattan.

As noted in this post, I recently made a discovery about vermouth.  I'd long perceived a wheaty aftertaste in our Manhattans which I'd assumed derived from the barley-based whiskey.  But then I tasted the same in a completely different cocktail which didn't involve whiskey but did include sweet vermouth.  I wouldn't exactly describe the taste as a flaw but given the choice, I could do without it.  As such, trying out different vermouths became a more meaningful exercise. 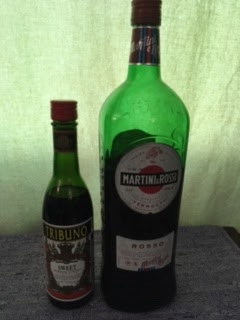 Martini & Rossi has been our brand of choice for a while.  It was recommended by one author or another - I can't remember whom - and has served us just fine.  The company is based in Turin and has been producing vermouth since 1863.  Tribuno is our first challenger, an American product, originally from New York City, 1938.  Vermouth is relatively cheap so price is not a major consideration but for the record, Tribuno is the less expensive of the two.

Without a doubt, the Martini & Rossi is the culprit in the aftertaste mystery.  It went away with the Tribuno.  Merely sniffing the bottles revealed a significant difference.  Tribuno smells and tastes simply more like, well, wine.  The resulting cocktail is fruitier and, at least to our palettes, better.