This one was a pleasant surprise. I was entirely prepared to dislike Green Lantern. The series embodies many of the things I find frustrating about the recent DC Comic story lines, namely heroes taking on new aliases. Are you really going to make Batman more interesting by making his alias someone other than Bruce Wayne? Why not work to develop the Bruce Wayne character instead? Dynamism is good. Why is Huck Finn a stronger character than Tom Sawyer? Because he changes.

Just in the New 52 books I've read, I've encountered three different Green Lantern characters: Hal Jordan, Guy Gardner and Sinestro. To add to the confusion for the newbie, they all wear exactly the same uniform, too. And yet, I have to admit, somehow it works. The three I've mentioned are all very different from each other. While I still contend that one character with a complex personality would be preferable, the idea of team members offering different aspects to one unifying concept is compelling in its own way.

And so, Green Lantern #1 passes my curiosity test, the second New 52 title to do so. It is not lost on me that this book and Justice League #1 (the other one to pass my test) were both written by Geoff Johns. I think I'm willing to give next week's Green Lantern Corps #1 a try as well.

I honestly did not see Sinestro's appearance at the end coming. For starters, I'd gotten caught up in Hal Jordan's real life love and money issues. I'd briefly forgotten about the whole Green Lantern thing. Plus, I assumed that the Jordan and Sinestro stories would be developed slowly and separately, not to be intertwined until further issues. As such, Sinestro's arrival was genuinely startling for me. I really like the set up of one character who desperately wants to be a Green Lantern and another who's just as eager to be rid of the burden.

I love the floating Oompa-Loompas...er...Guardians... 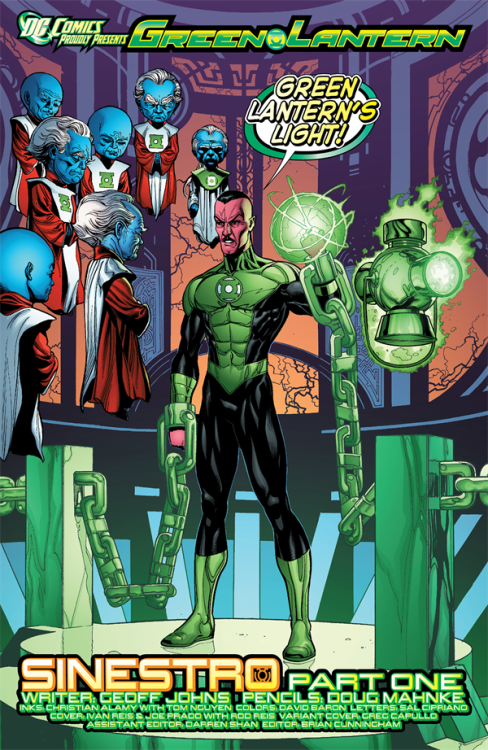 Posted by The Armchair Squid at 5:23 PM