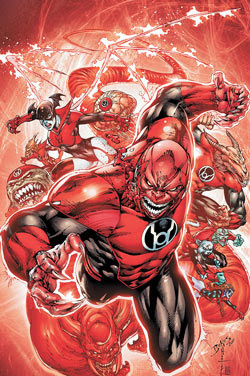 I liked Red Lanterns #1 a lot more the second time through, definitely a sign of quality. In light of my enjoyment of the three Green Lantern titles I've read thus far, it seemed only right to go back and try this September 14th release. The first time through it, I was put off by what I still consider gratuitous violence and gore. I also wasn't particularly excited by the idea of a storyline built around the emotion of rage. I don't identify very well with anger in general. I'm sure I could spend many hours on a therapist's couch working that one out but I don't think the pages of a comic book are the place to do it.

But in my second reading, I was able to see past the blood and appreciate the nuances of the story. The book went from failing my curiosity test on the first read to passing it on the second. In fact, I'm hoping DC will initiate series for each of the other colors in the Emotional Spectrum as well. I don't see anything in their upcoming releases as yet but I'll keep my eye out for them.

Part of the appeal for me is, admittedly, the color scheme. My college's school colors are scarlet and black and I developed a great fondness for that combo in my time there. It would almost have been worth playing a varsity sport just for the letter jacket. There are other reasons I like it, of course, but they are best addressed after the...

I like the fact that the lead character, Atrocitus, is not an Earthling. He's clearly got some issues to work out, too - always a bonus for us, the readers. As I said in my first post, there should be at least one poster-worthy image in a comic book beyond the cover and Atrocitus's entrance is awesome: Within context, the "What are you doing to my cat?" line is truly inspired.

In fact, it would seem that Earth doesn't have a Red Lantern at all yet. It's a good bet that John and Ray are the likely candidates. But which one? At least for the moment, Ray is the one who identifies more readily with rage. However, we the readers are encouraged to be more sympathetic toward John. This is just the sort of question that makes for great storytelling in a serial format.

I love the cat:

However, as a longtime cat owner, I might argue that rage is not the best emotional choice for a feline. Avarice might be more appropriate (Orange Lantern Corps). Laziness would be most accurate - perhaps a new Beige Lantern Corps?

Finally, it seems only appropriate that Atrocitus should be worried about the viability of the Corps he himself has created. Rage is certainly a volatile, diffuse and often fleeting emotion. The Red Lantern Corps should reflect that.

Posted by The Armchair Squid at 12:25 PM